“Flee to the south come fall
abandon the nest, neighbor and all.”
Sprawled on a bed of disaster,
awakened by the unfamiliar,
alert now, he listened closely
hearing only a truncated echo:
“Flee to the south!”
“Flee to the south!”
“Flee to the south!”
The disembodied voice, a welcome relief
from nightmares of helicopter
gunships, gaping wounds, bodies
stacked like cordwood,
collages of death and destruction
that had awakened him for years,
and more recently, night terrors
of life’s realities: love lost, locked doors, filth, emptiness,
madness stared back from his bathroom mirror,
court documents served as benchmarks
along his path of self-destruction:
Divorce papers
Protection from Abuse Order
Involuntary commitment
The voice was an answered prayer, although
not his (He had not yet learned to pray).
Staring into the abyss, considering the unthinkable
he obeyed, “Flee to the south” 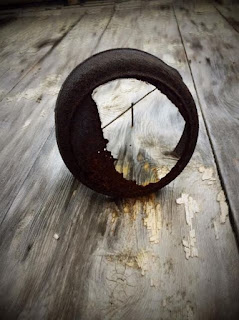